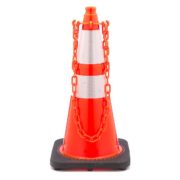 A traffic cone is the paper clip or rubber band of the traffic safety industry. It is a simple product with an abundance of uses and applications. Commonly used on the roads to direct traffic or mark hazards. They are also used indoors to block off entrances or keep people out of areas under construction. Cones are used to direct crowds of people at events, as temporary sign stands, or they can be used during exercise drills and during driver license exams. The list goes on, and as people have discovered new uses for them, they have also developed some accessories to further legitimize their significance. 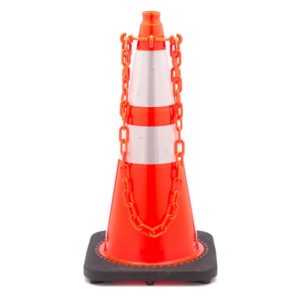 The Traffic Cone Chain Connector can be placed over the top of each cone, allowing for plastic chains to create a quick and cheap barrier. This application is ideal for parking lots and crowd control.

The Retractable Cone Topper can be mounted on taller cones to create a barrier most commonly used to direct lines of people. The reflectivity of cones and this accessory make them ideal for situations that call for high visibility.

T-CAPs are a great way to support caution tape, rather than using random objects and items. The control assist product allows users to slip the tape in a slit that is mounted over the cone, making it easy to use caution tape safely and effectively. 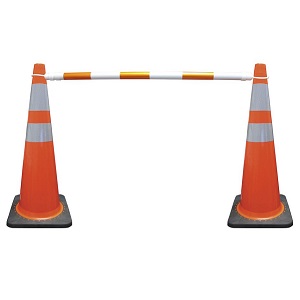 Retractable Cone Bars is a popular accessory that connects two cones with PVC piping, creating a quick and highly visible barrier for construction, pedestrian walkways or parking lots. These bars can be used with most traffic cones and stretch from 4 to 7 ft.

Traffic Cone Signs turn any cone into a light-weight sign that is easy to see and move. The signs slip into the top of the cone and lock into place.

Cone Brackets for Barricade Lights are an easy way to make use of any extra barricade lights. The product easily fits over the top of the cone, allowing for simple mounting.

If you’re looking for an actual light, the UniLamp is a practical solution. The 360 degree computer designed high clarity poly-carbonate lens comes in amber or red, and also slips easily over the top of your cones.

Popular among utility workers, Truck Cone Holders are used to firmly stack cones in place without having to worry about moving around the vehicle. Simply bolt it onto your truck and stack away!

Traffic Cone Carts are another way to easily transport your cones within shorter distances.

Finally, Traffic Cone Weights can be used to help stabilize cones in high speed or windy areas. They are made from 100% recycled rubber and easily slip over the cone, resting on the base.