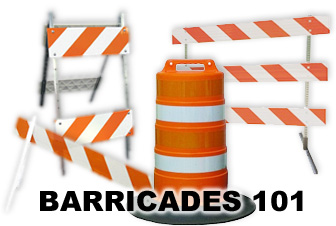 Traffic barricades (also known as safety or road barricades) are used to control the flow of traffic in a specified area. They are used at construction sites, accident scenes, as roadblocks, at schools and in a variety of other crowd control situations. There are many different types of road barricades in varying sizes, weights and strengths. So it is important to choose the type of barricade that will best serve your needs. This is a quick traffic barricade overview for those who are just getting acquainted with the types of barricades and their uses that we hope you will find helpful. 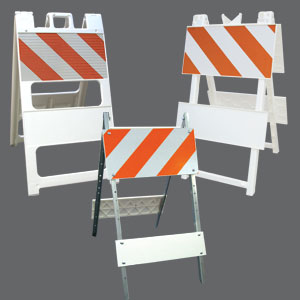 The Type I Barricade is so named because it has only one reflective rail. Typically it is at least 24 inches wide with orange and white stripes alternating at a 45 degree angle. Sometimes, a second non-reflective rail is added to help give it a more stable base of support. Often Type I Barricades are used for pedestrian traffic control and are used on low speed roads. 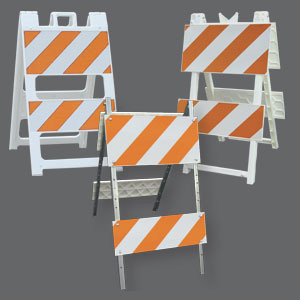 Type II Barricades have two reflective rails, also with alternating orange and white stripes. Because the bottom portion of the barricade is also a reflective surface, these generally offer better visibility at night than the Type I Barricades. These barricades also meet the requirements for use on expressways or other higher speed roads. 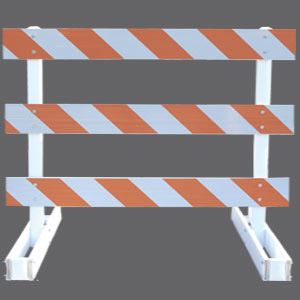 Type III Barricades are larger and have (yes you guessed it) three reflective panels with alternating orange and white stripes. They are at least 4 feet wide (or larger) and are most often used for road closings because of their size and visibility. You have seen these types of barricades positioned across roadways for detours, road closing and other types of traffic control. 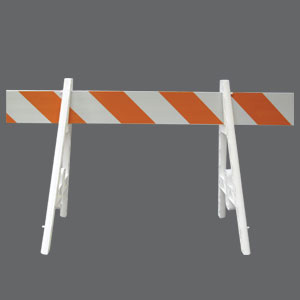 A-Frame Barricades typically include a pair of A Frame barricade legs plus a two-sided reflective barricade board. Often they are used to keep a safe distance for workers or pedestrians on roadway work sites or for events needing crowd control.

Traffic Barrels (also referred to as channelizer drums) are also used at construction sites and have alternating white and orange reflective bands. They typically have a rubber base that helps them to remain upright during strong winds or when hit by a vehicle. Most have a handle on top for easy pick up and carry as well as to provide a place to place a barricade light for increased visibility at night.